The six days cuisine and cultural sites tour from OHH! ITALY provides you with experiences of authentic Italian culture and memories to treasure for your lifetime. 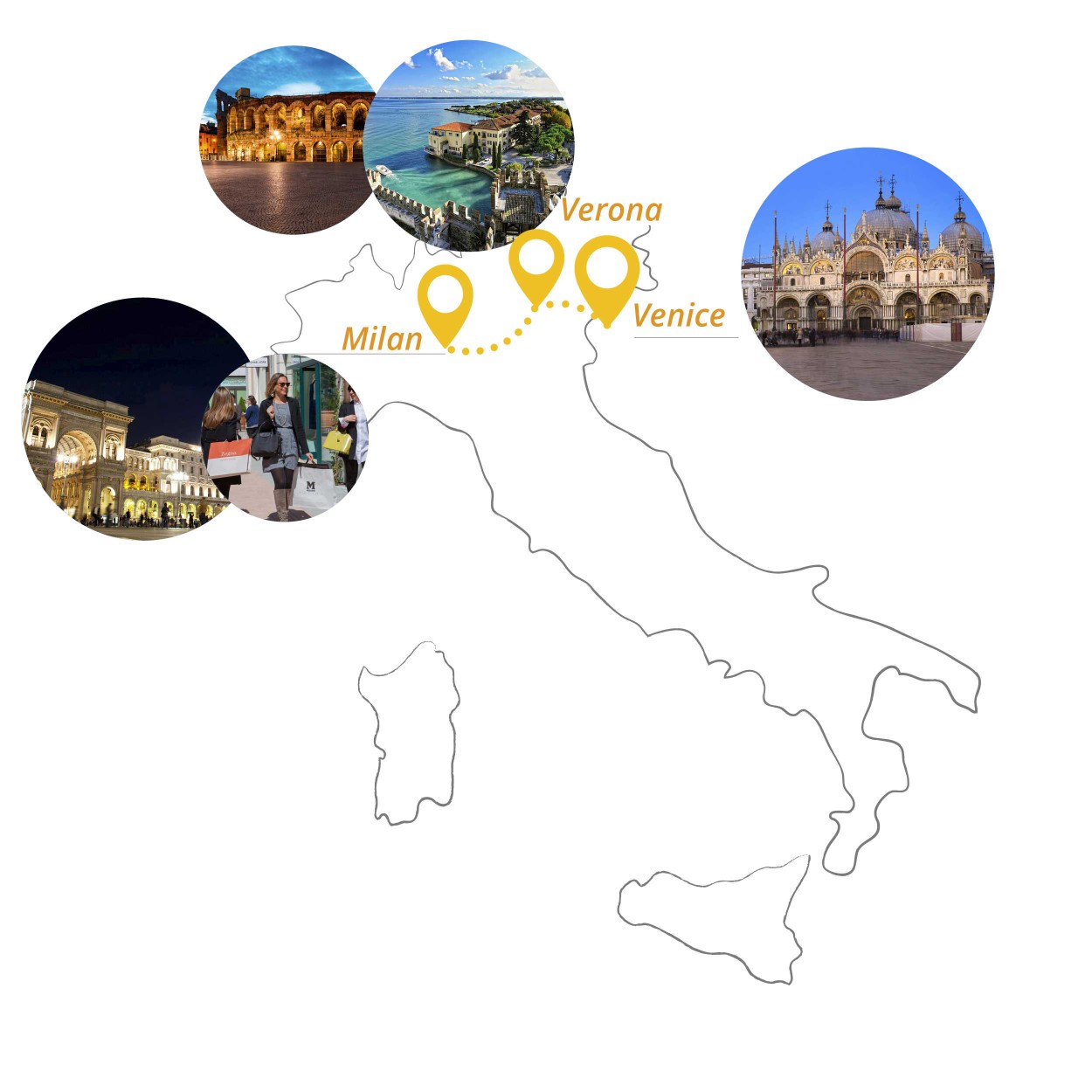 On DAY1,  after the welcome and the check in at the hotel, our expert guide will accompany you for a private walkaround tour in Venice. You will start from Correr Museum that will capture your attention from the very beginning with the incredible collections housed within the Correr Museum: a history that spans centuries, ready to amaze visitors with magical and amazing stories about the city. After you will move to the Doge’s Palace Museum, the ancient Doge’s Palace is a true masterpiece of Venetian Gothic architecture. Probably built in the IX century, and transformed over the centuries to achieve the elegant look it has today, the Doge’s Palace was the power and grandeur of the Venetian Republic up to its downfall. If you are visiting Venice, Teatro La Fenice is definitely a must for making your stay in Venice unique. The visit between the stucco and gold of its prestigious venues gives you a backstage secret of the Theater and its stars, tracing its history from its origins to the present day. This fascinating tour will conclude between the ancient walls of St Mark’s Basilica, with a tour of its golden interior. Originally built to house the precious relics of St. Mark, which had been stolen by two merchants of Venice in Alexandria, Egypt, St Mark’s Basilica assumed the role of a cathedral only in 1807, after keeping for centuries the role of Palatine Museum of the Doge’s Palace.

San Erasmo Island and the Orto

On DAY2, in the morning time, your English speaking guide will take you to the island of San Erasmo. This Island is just 15 minutes by boats from Venice and in the 16th Century was covered in vineyards. Michel Thoulouze and his family decided to relaunch wine production on the island using the traditional methods of the local farmers and the expertise of Lydia and Claude Bourguignon (Doctors of the Earth) and Alain Graillot whose Crozes Ermitage wines have a worldwide reputation. The resulting wine, ORTO, has all the character of this special island and it is the only wine cultivated within the territorial boundaries of Venice. A tour of the winery is a unique experience demonstrating the dedication that goes into every stage of production, artisanal in care and refined in technology. Here, a glass of wine awaits to reveal the secrets behind a great passion.

Transfer from Venice to Rome

On DAY3 you will be transferred with our luxury Mercedes minivan from Venice to Verona (about 1 hour). Once there your English speaking guide will lead you in one of the most stunning city in Italy with plenty of historic spots to rejuvenate your romantic side, Verona. Let’s start from the famous Arena, symbol of Verona, located in the beautiful Piazza Bra, followed by Piazza delle Erbe and Piazza dei Signori, characteristic squares surrounded by medieval buildings, Porta Borsari, the ancient Roman gate, St. Anastasia Church a fine example of Italian Gothic architecture, with its impressive interior adorned by Pisanello’s freco and Scaligeri Tombs. After a walk along the Adige riverbank from which you will have the perfect view of the Roman Theater and the Stone bridge, you can live again the timeless love story between Romeo and Juliet, by seeing their houses and the celebrated balcony and you will visit the setting of the two Shakesperian lovers the Basilica of San Zeno, the most beautiful and better preserved examples of Romanesque architecture in the whole of Northern Italy.

On  DAY4, you will head to the stunning “Villa Mosconi Bertani” a picturesque estate and grounds dating to the 18th Century in the heart of historic Valpolicella, birthplace of the legendary Valpolicella and Amarone wines and just minutes from Lake Garda. The Villa and its cellars have played a significant role in the history of Veronese winemaking. Today in this same storied location, Gaetano Bertani and his sons continue their three century old family tradition. Tastings at the Villa Mosconi Bertani offer visitors the opportunity to discover and compare a variety of wines with an accompaniment of foods produced in the Verona area. All tastings include a tour of the villa, park and winery. After this sensory experience you can taste some of the most well known italian wines suitably choosen for you. In the afternoon, after a light lunch at Villa Mosconi Bertani you will visit a small jewel suspended in the middle of the lower Lake Garda, the town of Sirmione. The old town is at the northern end of a long and narrow peninsula (exists as an island, since it was isolated from the mainland by a navigable moat, which is exceeded by only one access road, a bridge). Departing from the historic Center, where you will make the first step to admire the Villa Callas where he lived the famous lamented Maria Callas. After you will reach the middle of hike and enjoy a splendid view of the famous Grotte di Catullo, built between the first century BC and the first century A.D. and most magnificent example of this Roman villa in northern Italy. Moving away will stop near the famous spring water of Sirmione, valued for their effective contribution to the maintenance and recovery of physical fitness. To conclude this pleasant excursion you get to Sirmione Castle, passing under the characteristic and picturesque drawbridges for visiting the major point of interest of this little city.

Seductive side of shopping in Milan

On  DAY5, after the transfer from Verona to Milan (about 2 hours), you will discover the best fashion studios, the best showrooms of Milan designer, the best boutiques specialized in niche and leading-edge brands; guided by our professional Personal Shopper ready to stimulate you with the most sought-after offers to fulfill your needs. We do not have the ordinary old tour in mind for you, one limited to the top signature brands, but instead we are on a quest to give you a more in-depth experience by introducing you to the thousand faces of trendy Milan. Four hours dedicated to style, you will be taken on a rigorous and personalized journey to discover where innovation and culture cross paths revealing the most seductive side of shopping in Milan.

On DAY6, you will be transferred to Serravalle (about 1 hour) for head off on a wild day of shopping. Known as the Serravalle Outlet Village, this Designer Outlet is a big shopping village near Serravalle Scrivia . It lies between the hills of the Apennines Ligure and the beginning of the Po Valley, nestled in the hills of Gavi. Located in the province of Alessandria, it is also easily accessible from Milan. Find your favourite designer brands at 35% -70% less, all year round. The beautiful setting with mosaics and frescoes – inspired by Venetian and Treviso palazzos – the cafes and restaurants, the children’s play area, the free parking and with 140 boutiques, there is something for everyone. From iconic fashion brands like Prada, Gucci, Armani, Fendi, Jil Sander and Paul Smith to sporting labels, like Nike and X-Bionic, and high-street favourites, like Guess and Desigual.