Football in Milan, a gondola ride in Venice, the Chianti Hills in Florence

Discover the beauties of some of the

This exclusively OHH! ITALY tour will lead you in places full of history and culture, in a unique sensorial experience. 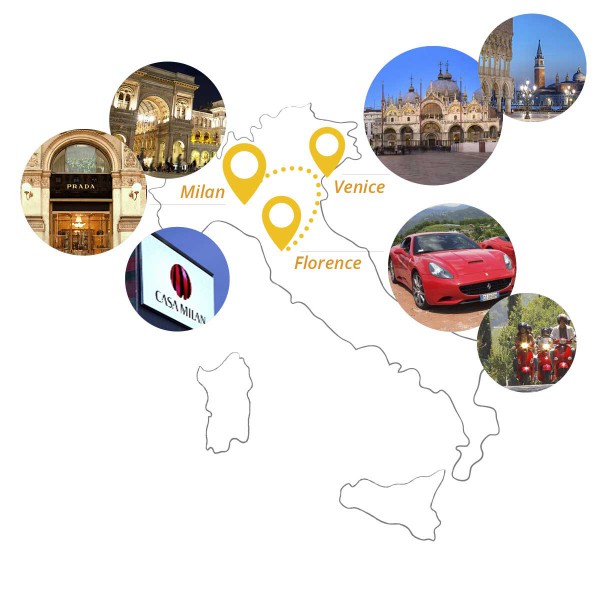 On DAY1, after the welcome and the check in at the hotel, you will be introduced to Italy’s most stylish city. Stop by the alluring Galleria Vittorio Emanuele II shopping gallery, a 19th century glass vaulted shopping arcade. Visit the medieval Sforza Castle. A grand medieval Castle and fortress, the castle was once seat and residence for the ruling family of Milan and now houses several of the city’s museums and art collections. Next, tour the splendid Duomo, one of the world’s largest, most striking Gothic cathedrals. After visit Milan’s most famous Opera House, the fabulous La Scala theatre. Least but not last Leonardo da Vinci’s masterpiece, The Last Supper, housed at Santa Maria delle Grazie in Milan and spotted in the UNESCO World Heritage List.

On DAY2, you will head to San Siro Stadium, the symbol of Football in Milan. Every visitor in San Siro gets the chance to visit the usually inaccessible places of the stadium such as the changing rooms, the mixed zone, the stands and walking through the tunnel of Champions to get into the legendary pitch of “La Scala del Calcio”. You will recollect old memories through the Museum of AC Milan and FC Inter. Realize your dream and try the emotion to get into the most characteristic stadium in the world, supported by experienced staff. The museum’s exposition also help you to reconstruct 100 years of football history written by both Milan teams. After that, you will moving to “Mondo Milan”, an exhibition experience that presents AC Milan trophies in a unique way, and narrates the club’s history through the innovative matching of rare historic memorabilia with the most advanced interactive technologies. An experience that allows you to live the emotions of AC Milan’s 115 years of history, a unique mix of success, shadows and lights from the past blended with the present of a modern multimedia-oriented club. From the Hall of Fame to the Ballon d’Or Winners Room, from the Trophies Room with the most important cups won by AC Milan until today to the holographic theatre: memories and testimonies merge with the things that have made up the club’s history into a climax of emotions. At the end of your “Football Experience”, you will have a fantastic lunch at Cucina Milanello, the official AC Milan restaurant. In the afternoon, you will have some free time for shopping in Milan downtown before being transferred with our luxury Mercedes minivan to Venice (about 2\n hours).

On DAY3, our expert guide will accompany you for a private tour of the “Peggy Guggenheim Collection”, the most important museums in Italy for European and American art of the 20th century. It is located in Peggy Guggenheim’s former home, Palazzo Venier dei Leoni, on the Grand Canal in Venice. The museum presents Peggy Guggenheim’s personal collection, masterpieces from the Hannelore B. and Rudolph B. Schulhof Collection, the Nasher Sculpture Garden, as well as temporary exhibitions. Peggy Guggenheim was born in New York on 26 August and her career belongs in the history of 20th century art. Peggy used to say that it was her duty to protect the art of her own time, and she dedicated half of her life to this mission, as well as to the creation of the museum that still carries her name. The core mission of the museum is to present the personal collection of Peggy Guggenheim. The collection holds major works of Cubism, Futurism, Metaphysical painting, European abstraction, avant-garde sculpture, Surrealism, and American Abstract Expressionism, by some of the greatest artists of the 20th century. After a light you will hear the history of how the Duke and his council made decisions that controlled the fate of this 1,000-year republic. Immerse yourself in the European Middle Ages, and see masterpieces of art adorning the walls of the Doge’s Palace. Relive the anguish of the prisoners that crossed the Bridge of Sighs, and experience the inside of the prison cell that once hosted Giacomo Casanova. After your guided exploration of the Doge’n Palace, you will be taken on a tour of the inside of St. Mark’s Basilica. The Cathedral displays some of the finest examples of Byzantine art in the world, and is the only cathedral of its kind in Italy. Take in the beautiful golden mosaics and marble floor inlays. Learn about the Basilica’s history, and discover the Biblical symbolism behind the Cathedral’s art. Admire the Pala d’Oro, the high altar of the Basilica, decorated with thousands of gems and precious stones. Originally built to house the precious relics of St. Mark, which had been stolen by two merchants of Venice in Alexandria, Egypt, St Mark’s Basilica assumed the role of a cathedral only in 1807, after keeping for centuries the role of Palatine Museum of the Doge’s Palace.

On DAY4, after the breakfast you will head to Noventa di Piave (about 1 hour) for head off on a wild day of shopping. Known as the Outlet Village of  Noventa di Piave, the Designer Outlet Veneto is the quality shopping center closer to Venice . It is located in one of the most picturesque settings of the Venetian plain, along the Piave River and a stone’s throw from the largest of the Mediterranean lagoon. Find your favourite designer brands at 35% -70% less, all year round. The beautiful setting with mosaics and frescoes – inspired by Venetian and Treviso palazzos – the cafes and restaurants, the children’s play area, the free parking and with 140 boutiques, there is something for everyone. From iconic fashion brands like Prada, Gucci, Armani, Fendi, Jil Sander and Paul Smith to sporting labels, like Nike and X-Bionic, and high-street favourites, like Guess and Desigual. Once back in Venice you will have the chance to experience a ride in gondola, that will lead you along enchanting canals and lesser known views to admire some of the most characteristic palaces in Venice on board a private gondola. The tour will end at the Venice Casino, magical setting overlooking the Grand Canal, where you can have a fantastic dinner and gambling all night long.

On DAY5, in the morning time, you will be transferred with our luxury Mercedes minivan at the Ferrari Museum in Maranello (about 1,5 hours). “Live the dream” is the claim that welcomes visitors, promising an immersive, unique experience. The Ferrari Museum focuses on Ferrari’s present and future, whilst remaining deeply rooted in the Prancing Horse’s extraordinary history. A permanent exhibition dedicated to Formula 1 and the World Championship, complete with cars and a “pit stop wall” where visitors can gain an understanding of telemetry and pilots’ in-race driving behavior, is flanked by five rooms that host themed exhibitions with wide-ranging appeal. The space dedicated to Enzo Ferrari, rather than a museum in the traditional sense of the word, is a fascinating, exciting event that manages to combine truly unique elements: in the futuristic 2,500 m2 pillar-free hall visitors can get close and personal with the many cars exhibited, but also experience a show that – through an immersive biopic screened using 19 projectors – tells Enzo Ferrari’s incredible life story, spanning 90 years, taking them through his various incarnations: from the child who discovered racing at the beginning of 1900 to the pilot, from the manager of Scuderia Ferrari through to the manufacturer with so many triumphs to his credit. After a light lunch at the official Ferrari restaurant, buckle your belts and live life in the fast lane with our Ferrari Driving Experience. It is safe to say that we have all dreamed of testing out the advanced automotive at least once in our lives so we have decided to make those dreams come true. You can choose between a relaxing driving on the hills or an adrenaline race on the F1 track. In addition, you will decide which model of Ferrari you would like to drive and the length of your driving experience. After this amazing driving experience, you will head to Florence for the night.

On DAY6, you will have fun riding a Vespa along the scenic and peaceful roads on the Tuscan hills. An alternative way to admire the sights of Chianti, wrapped in the perfumes of the Tuscan countryside and the sound of the working farms. Our escort will be showing you around small medieval villages situated in the heart of Tuscany. Those who do not feel confident enough about riding on their own can opt for riding with one of our expert escorts. The tour along the Chianti hills lasts all day. You will be stopping in a renowned farm for a wine tasting and a light lunch.​