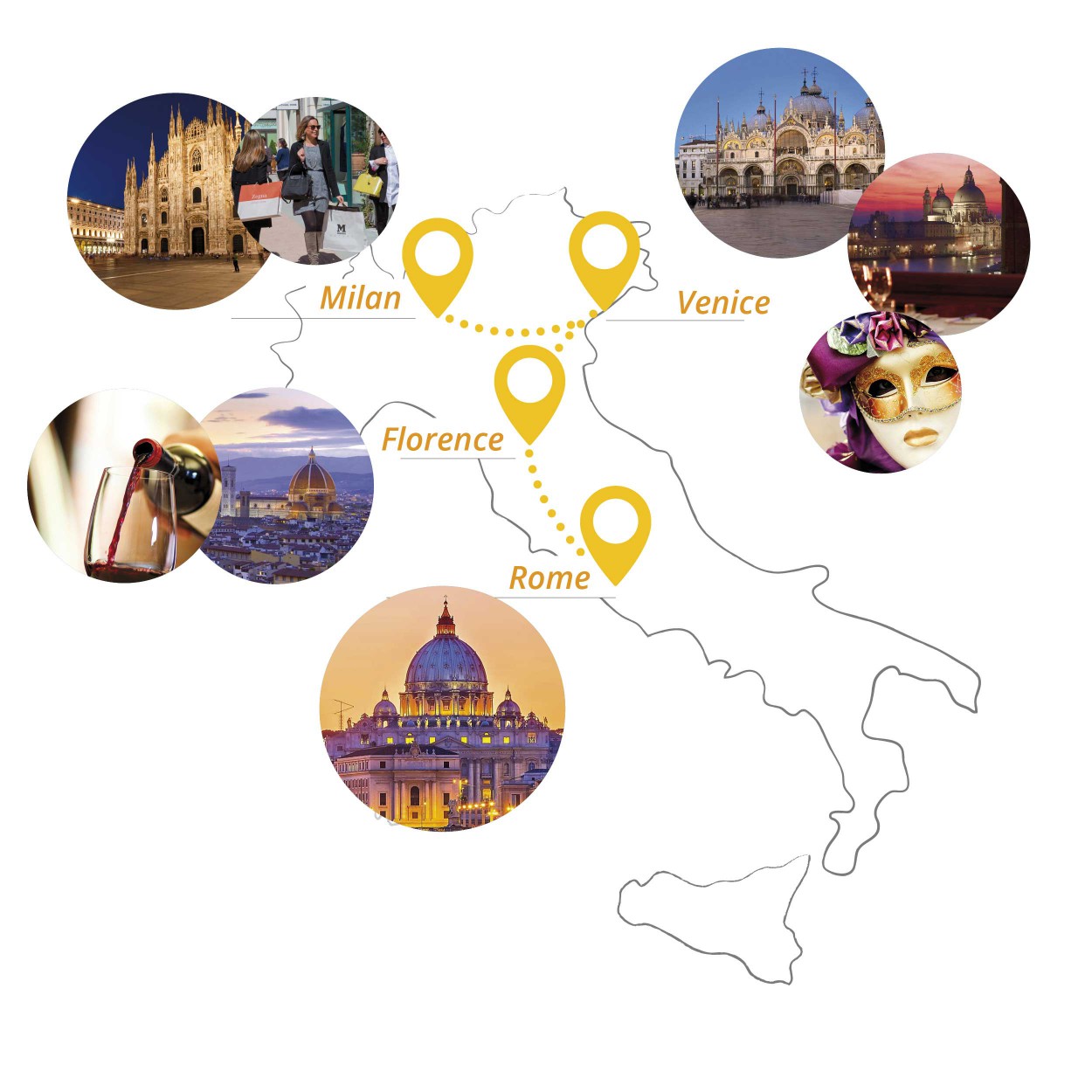 On DAY1kujhbkjhbjkhbjkhbkjhbkdeur of the Venetian Republic up to its downfall. If you are visiting Venice, Teatro La Fenice is definitely a must for making your stay in Venice unique. The visit between the stucco and gold of its prestigious venues gives you a backstage secret of the Theater and its stars, tracing its history from its origins to the present day. This fascinating tour will conclude between the ancient walls of St Mark’s Basilica, with a tour of its golden interior. Originally built to house the precious relics of St. Mark, which had been stolen by two merchants of Venice in Alexandria, Egypt, St Mark’s Basilica assumed the role of a cathedral only in 1807, after keeping for centuries the role of Palatine Museum of the Doge’s Palace.

On DAY2, we will guide you throughout the secrets of the Venice’s islands. This fascinating boat trip in Venice offers you a Murano and Burano a full-day sightseeing tour: our Venice lagoon trip has, in fact, a total duration of six hours. The first stop on our visit to the Venice islands lagoon will be to the Venice island of Murano, known throughout the world for its ancient tradition of glass making. The excursion then continues to the Venice island of Burano, the bustling island famous for its colourful houses and the hand-crafted lace work, true works of art made of lace that can be purchased at local shops or street stalls. For lunch, you will stop at the famous “Osteria Gatto Nero” that serve typical Venetian dishes from more than 40 years. Once back in Venice, you will have some free time for shopping

On DAY3, in the morning, you will visit a small jewel suspended in the middle of the lower Lake Garda, the town of Sirmione (about 1,5 hours from Venice). The old town is at the northern end of a long and narrow peninsula (exists as an island, since it was isolated from the mainland by a navigable moat, which is exceeded by only one access road, a bridge). Departing from the historic Center, where you will make the first step to admire the Villa Callas where he lived the famous lamented Maria Callas. After you will reach the middle of hike and enjoy a splendid view of the famous Grotte di Catullo, built between the first century BC and the first century A.D. and most magnificent example of this Roman villa in northern Italy. Moving away will stop near the famous spring water of Sirmione, valued for their effective contribution to the maintenance and recovery of physical fitness. To conclude this pleasant excursion you get to Sirmione Castle, passing under the characteristic and picturesque drawbridges for visiting the major point of interest of this little city.

After a light lunch in a typical restaurant in Sirmione you will head to the most famous Prosecco winery in Italy: Ca’ Del Bosco opens its cellars for tours designed to give wine enthusiasts first-hand knowledge of how Franciacorta is made and to guide them around the vineyards at the winery. A walk through the Ca’ del Bosco barrique cellars, historic repositories of art and innovation, takes visitors to the Cupola. A tour of the winery is a unique experience demonstrating the dedication that goes into every stage of production, artisanal in care and refined in technology. Here, at the heart of the estate, a glass of wine awaits to reveal the secrets behind a great passion.

After this winery experience you will head to Milan for the night.

On DAY4, after the breakfast, you will head to San Siro Stadium, the symbol of Football in Milan. Every visitor in San Siro gets the chance to visit the usually inaccessible places of the stadium such as the changing rooms, the mixed zone, the stands and walking through the tunnel of Champions to get into the legendary pitch of “La Scala del Calcio”. You will recollect old memories through the Museum of AC Milan and FC Inter. Realize your dream and try the emotion to get into the most characteristic stadium in the world, supported by experienced staff. The museum’s exposition also help you to reconstruct 100 years of football history written by both Milan teams. After that you will moving to “Mondo Milan” , an exhibition experience that presents AC Milan trophies in a unique way, and narrates the club’s history through the innovative matching of rare historic memorabilia with the most advanced interactive technologies. An experience that allows you to live the emotions of AC Milan’s 115 years of history, a unique mix of success, shadows and lights from the past blended with the present of a modern multimedia-oriented club. From the Hall of Fame to the Ballon d’Or Winners Room, from the Trophies Room with the most important cups won by AC Milan until today to the holographic theatre: memories and testimonies merge with the things that have made up the club’s history into a climax of emotions. At the end of your “Football Experience”, you will have a fantastic meal at Cucina Milanello, the official AC Milan restaurant.

In the afternoon, you will be introduced to Italy’s most stylish city. Stop by the alluring Galleria Vittorio Emanuele II shopping gallery, a 19th century glass vaulted shopping arcade. Visit the medieval Sforza Castle. A grand medieval Castle and fortress, the castle was once seat and residence for the ruling family of Milan and now houses several of the city’s museums and art collections. Next, tour the splendid Duomo, one of the world’s largest, most striking Gothic cathedrals. After visit Milan’s most famous Opera House, the fabulous La Scala theatre. Least but not last Leonardo da Vinci’s masterpiece, The Last Supper, housed at Santa Maria delle Grazie in Milan and spotted in the UNESCO World Heritage List.

On DAY5, in the morning time, you will discover the best fashion studios, the best showrooms of Milan designer, the best boutiques specialized in niche and leading-edge brands; guided by our professional Personal Shopper ready to stimulate you with the most sought-after offers to fulfill your needs. We do not have the ordinary old tour in mind for you, one limited to the top signature brands, but instead we are on a quest to give you a more in-depth experience by introducing you to the thousand faces of trendy Milan. Four hours dedicated to style, you will be taken on a rigorous and personalized journey to discover where innovation and culture cross paths revealing the most seductive side of shopping in Milan.

After a light lunch you will head to Florence for the night (about 2,5 hours)