Experience the Italian passion for soccer and shop in Milan

Experience the Italian passion for soccer and shop in Milan

Experience the heat and excitement of Italian soccer passion first hand with a tour of the best soccer sights with OhhItaly! 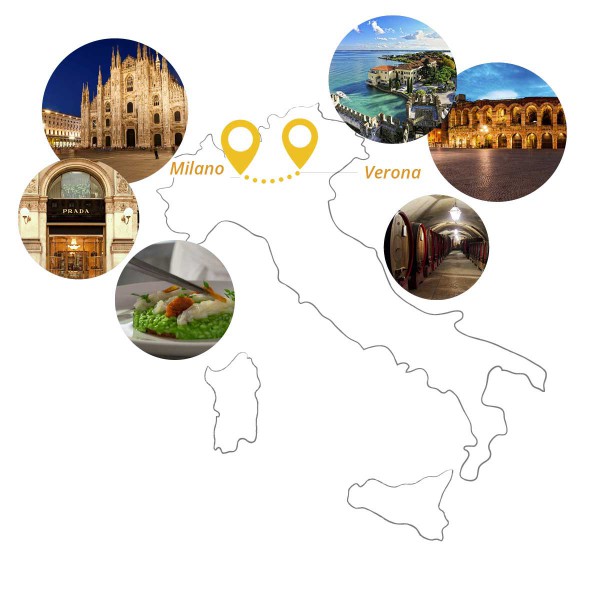 On DAY 1, after the welcome and the check in at the hotel, you will head to San Siro Stadium, the symbol of Football in Milan. Every visitor in San Siro gets the chance to visit the usually inaccessible places of the stadium such as the changing rooms, the mixed zone, the stands and walking through the tunnel of Champions to get into the legendary pitch of “La Scala del Calcio”. You will recollect old memories through the Museum of AC Milan and FC Inter. Realize your dream and try the emotion to get into the most characteristic stadium in the world, supported by experienced staff. The museum’s exposition also help you to reconstruct 100 years of football history written by both Milan teams. After that you will moving to “Mondo Milan”, an exhibition experience that presents AC Milan trophies in a unique way, and narrates the club’s history through the innovative matching of rare historic memorabilia with the most advanced interactive technologies. An experience that allows you\n to live the emotions of AC Milan’s 115 years of history, a unique mix of success, shadows and lights from the past blended with the present of a modern multimedia-oriented club. From the Hall of Fame to the Ballon d’Or Winners Room, from the Trophies Room with the most important cups won by AC Milan until today to the holographic theatre: memories and testimonies merge with the things that have made up the club’s history into a climax of emotions. At the end of your “Football Experience”, you will have a fantastic meal at Cucina Milanello, the official AC Milan restaurant.

On DAY 2, in the morning time, you will be transferred in Turin with our luxury Mercedes minivan (about 1 hours). After a little walkaround in the historical center, your English Speaking Guide will lead you to Juventus Stadium, the brand new “home” of Juventus Football Club. The J-Stadium is the first Italian football structure without barriers between the field and the seats, as well as the first eco-friendly stadium in the world, it is one of three Italian stadiums into the category 4 UEFA – the one with more technical level – as well as one of the two structure owned by a club in he Italian Championship. Considered among the most advanced stadiums in the world, it is one of the architectural symbols of contemporary Turin as well as one of the major centers of tourist attraction of the city. With this exclusive private tour, you will have the chance to visit the usually inaccessible places of the stadium such as the changing rooms, the mixed zone, the stands and walking through the tunnel of Champions to get into the pitch. After the stadium, you will visit the J-Museum, over 100 years of history and triumphs in an exhibition of trophies and memories: a multimedia path that makes your visit even more interesting. The visit begins at the history of the Club through the goal of the team, the Trophy Room, the places where Juventus played, the testimonies of the players, arriving at Juve of today and tomorrow and in a tribute to the fans around the world.

On DAY 3, you will be introduced to Italy’s most stylish city. Stop by the alluring Galleria Vittorio Emanuele II shopping gallery, a 19th century glass vaulted shopping arcade. Visit the medieval Sforza Castle. A grand medieval Castle and fortress, the castle was once seat and residence for the ruling family of Milan and now houses several of the city’s museums and art collections. Next, tour the splendid Duomo, one of the world’s largest, most striking Gothic cathedrals. After visit Milan’s most famous Opera House, the fabulous La Scala theatre. Least but not last Leonardo da Vinci’s masterpiece, The Last Supper, housed at Santa Maria delle Grazie in Milan and spotted in the UNESCO World Heritage List. In the afternoon, after a light lunch, you will discover the best fashion studios, the best showrooms of Milan designer, the best boutiques specialized in niche and leading-edge brands; guided by our professional Personal Shopper ready to stimulate you with the most sought-after offers to fulfill your needs. We do not have the ordinary old tour in mind for you, one limited to the top signature brands, but instead we are on a quest to give you a more in-depth experience by introducing you to the thousand faces of trendy Milan. Four hours dedicated to style, you will be taken on a rigorous and personalized journey to discover where innovation and culture cross paths revealing the most seductive side of shopping in Milan.